Bringing the music to life

Some people have been declared as the voice of radio and certainly are part of the heart of music and both have been said of EMMA SCOTT. Radio presenter, radio plugger, a staunch supporter of independent music and plenty more besides, Emma has worked in the music industry for 34 years, stepping into its demanding but rewarding embrace from the moment she left school when she straight away entered “the dizzy heights” of a Youth Training Scheme at her local radio station in Bedford back in 1988.

From thereon in she grew to become a focal point for established and new sounds and artists, from 1990 to 2013 radio presenting with her individual style and passion and subsequently gathering thousands of radio shows under her belt across some of the UK finest radio stations including Q RADIO, HEART, POWER FM, GALAXY RADIO, HALLAM FM, and METRO FM as well as the two biggest commercial radio brands in the UK, GLOBAL RADIO and BAUER RADIO.

Becoming one of the top 20 Drive Time presenters in the UK whilst at rock and metal station, KERRANG! RADIO. 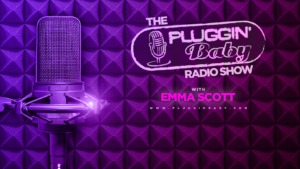